It's been a week since we got back home to Montreal and I am still having trouble slowing things down in my mind. It doesn't help that there is a full docket of work to be done but even at night images and thoughts are whirling around in my head.

People I met and who left a lasting impression. New friends and family that I miss even though our time together was so short. Sights and smells that are as fresh as the day I experienced them. 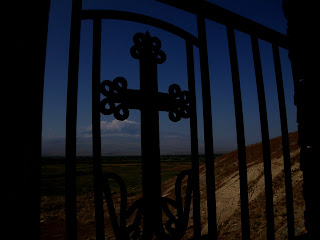 Though when I sit down and try to pin point what is really bothering me I keep coming up with only one thing. That 'my' people have hardened their hearts to the truth that is being put in front of them.

This nation that was the first to adopt Christianity as their official state religion cannot see past their noses (yes, some of those noses are long... LOL) at what can fill the huge void in their lives. It's not more jobs, even though jobs would help support families. It's not a new government, even though the corruption of the government has been adding to the frustration of the people. It's not more money from the outside, even though money would definitely put food on the table and smooth the crease of worry from their foreheads. It's simply accepting the free gift of salvation that God sent through the death and resurrection of Jesus Christ His Son.

It's simple. It's free. It's life changing. It's right there for the taking.

Hearts hard as the majestic mountains and rocks of this ancient country.

Keep in your prayers the missionaries that daily are out there spreading this wonderful message.