In 2008, after my wife and I went to Armenia, I had no thoughts of returning three years later. I also did not think that God could and would use me in any meaningful way in Armenia; or at least I didn’t think I was qualified enough. I used excuses similar to the ones Moses used: I am not young anymore, I don’t speak Eastern Armenian well, I am the pastor of an English-speaking congregation, I… I… I… etc. But God had other plans for me and for my daughter Ruth.

When I visited Armenia in 2008, I wanted to go to villages and towns and meet the forgotten and needy people, and I did. I developed a relationship with many of the people I met through Arayik Sardaryan, a missionary who continued visiting and meeting with these people regularly, helping them grow spiritually and keeping us informed here at Temple Baptist Church, now supporting him regularly so he could continue his mission work among them.
Three years, many prayers, and many phone calls and e-mails later, I felt God’s call to return to Armenia for another visit, but I still hesitated until I got a phone call from Arayik asking me to go back. He said that at least 24 people wanted to be baptized, some in Spitak, others in Stepanavan and Yerevan.
He also told me there were new cell groups being started and the outreach was extending outside Armenia. So I decided to return with my elder daughter Ruth so she could help me and also see the mission we have been supporting.
On September 13, we left Montreal and arrived in Yerevan almost a day later. The next morning we started visiting some of the people that I had visited in 2008, as well as some relatives. While visiting some poor and sick people, Ruth said: “Dad, Ann-Margret [her sister] should have been here with you. She is the writer; she could have written a book about the people here.”
But God had sent the two of us there and we had a mission. Our mission was to bring the good news of Jesus Christ to as many as we could and also to encourage and help the leaders who have so much work to do but so few to help them.
Before I left Montreal some people gave generous donations to help the poor and needy, as well as the missionary and the church we support there. All the expenses for the mission trip, the help given, and the Bibles that were purchased (about 300) were paid by private funds and gifts; these expenses did not tap into the church’s Missions budget, which supports three overseas missions: Bangladesh, Philippines and Armenia.
On Saturday, September 17, we left our hotel early in the morning for the baptismal service in Spitak. It was planned for 1 p.m. but when we arrived there it was already 2 p.m. While we tried to find the river and a suitable spot to have the baptismal service, Arayik went to Stepanavan to bring others. He had to travel through rocky roads for over two hours. In the meantime, 24 of us were crammed like sardines in a small van made for 8 to 13 people. I believe the many prayers for us were answered! 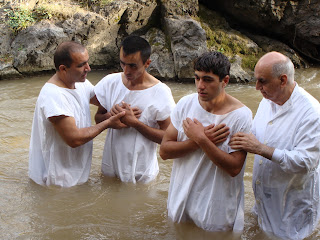 Finally, at 5 p.m. the service started with a short message. The water, flowing down from the mountains, was very cold and there was a strong and muddy current, but God was in control and Arayik and I were able to baptize 24 people. Afterward, there was another message, we had communion, and we gave a New Testament and a small golden cross pin to each person who was baptized. There were suppose to be 30 people baptized but one was giving birth that day and the others could not be brought because of lack of transportation from their villages.
We ended the special day with supper — a fire was lit to barbecue the chicken legs I had purchased in Yerevan — and fellowship. By the time we had supper and travelled another three or four hours back to the hotel, it was almost 2:30 am. I had to speak at a Baptist church that same morning but I could not fall asleep. A few hours later we were ready for church.

After my message at the Baptist church I gave an invitation and a few women came forward to accept Jesus as their Lord. There were many wonderful miracles we witnessed that would take a great number of pages to share with you; but I will share a few.
My parents had prayed for years for their relatives who had immigrated to Armenia in the 1940s. They had shared the gospel with them but had not seen any obvious results. Their prayers were answered about 70 years later when Ruth and I and Arayik visited one of the families and shared the good news of Jesus Christ with them.
The parents, their son and one of their daughters, Shushan, (the other wasn’t present) prayed and surrendered their lives to God and made Jesus Christ their Lord. (See page 3 for Shushan’s letter.) The other daughter who hadn’t been there came forward at the church service the following Sunday when I gave an altar call after my message. There were other cousins who indicated to me that day that they also had committed their lives to Christ.
I had the privilege to give a lecture at the CLC (Christian Leadership College) to about 50 leaders and pastors. The title of my message was “The Cost of Serving Christ.”

I was asked if it was possible to have our tract, What Are You Searching For?, in Eastern Armenian reprinted in Armenia with some small changes. I immediately went with Arayik to a printing house, had the changes made, had 50,000 printed within a few days. We may need to print more soon.
I was told that they would like to have my book, God’s Workshop, translated and printed in Eastern Armenian. I agreed and, with the help of some Campus Crusade workers and Pastor Hovhannes Halladjian, the Pastor of the Armenian Brotherhood Church of Yerevan, the book is almost ready to be printed and will be available for distribution free of charge (with donations toward the cost being welcomed).
More than 300 Bibles were purchased, distributed or given to our missionary and to ABCY for distribution.
Because of the difficult economic   conditions in Armenia, the Bibles and the book God’s Workshop are being given free. But the costs are high. If you would like to help us by buying one or many books for the people in Armenia, please let us know how many you would like to purchase or pay for. In Canada, the book sold for $16.95. The cost in Armenia is about $5.00. For more information, please speak or write to us.