This morning (Tuesday), we heard from Pastor Joseph and Jessie and they told us that they were at the hotel and taking it easy. I was a bit surprised as it was still early in the evening but they explained that Pastor had not been feeling very well since the day before so our friend Arayik drove him to the hospital for some tests. Thankfully, his heart was doing well and the blood tests were clear but his blood pressure was quite high. He could have stayed overnight at the hospital for observation but was also given the option to return to the hotel if he promised to rest for a few days and take some medication.

A few hours later, he called us back to say that he'd been following the doctor's orders and, having checked his blood pressure, was pleased to report that it was starting to come down to a healthier level. While his condition is not serious, we appreciate your prayers for his recovery. As you can imagine, he's eager to get back to doing ministry but he also recognizes that this is a good time for him and Jessie to have some quiet time and much-needed (and deserved) rest.

Here's a quick recap of what they've done so far during this trip:

We've uploaded the first set of photos (the wedding and the trip to Horom), which you can view HERE. More to come!

Thank you for your continued prayers and encouragement.

Photo below: Pastor Joseph and Jessie (left) with Pastor Tigran and his wife Valya in Horom. 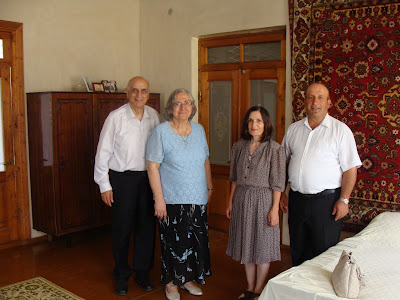